SAP SuccessFactors is a major HR software company that serves thousands of enterprise customers around the world. Over my time at SuccessFactors I have had the opportunity to work on a number of product areas including Search, Opportunity Marketplace, Manager Feedback, and the Homepage - all across web and mobile platforms. I have owned and led most of my projects, defining the design process and acting as a mentor to junior designers. Currently, I am the design lead and owner for Search. 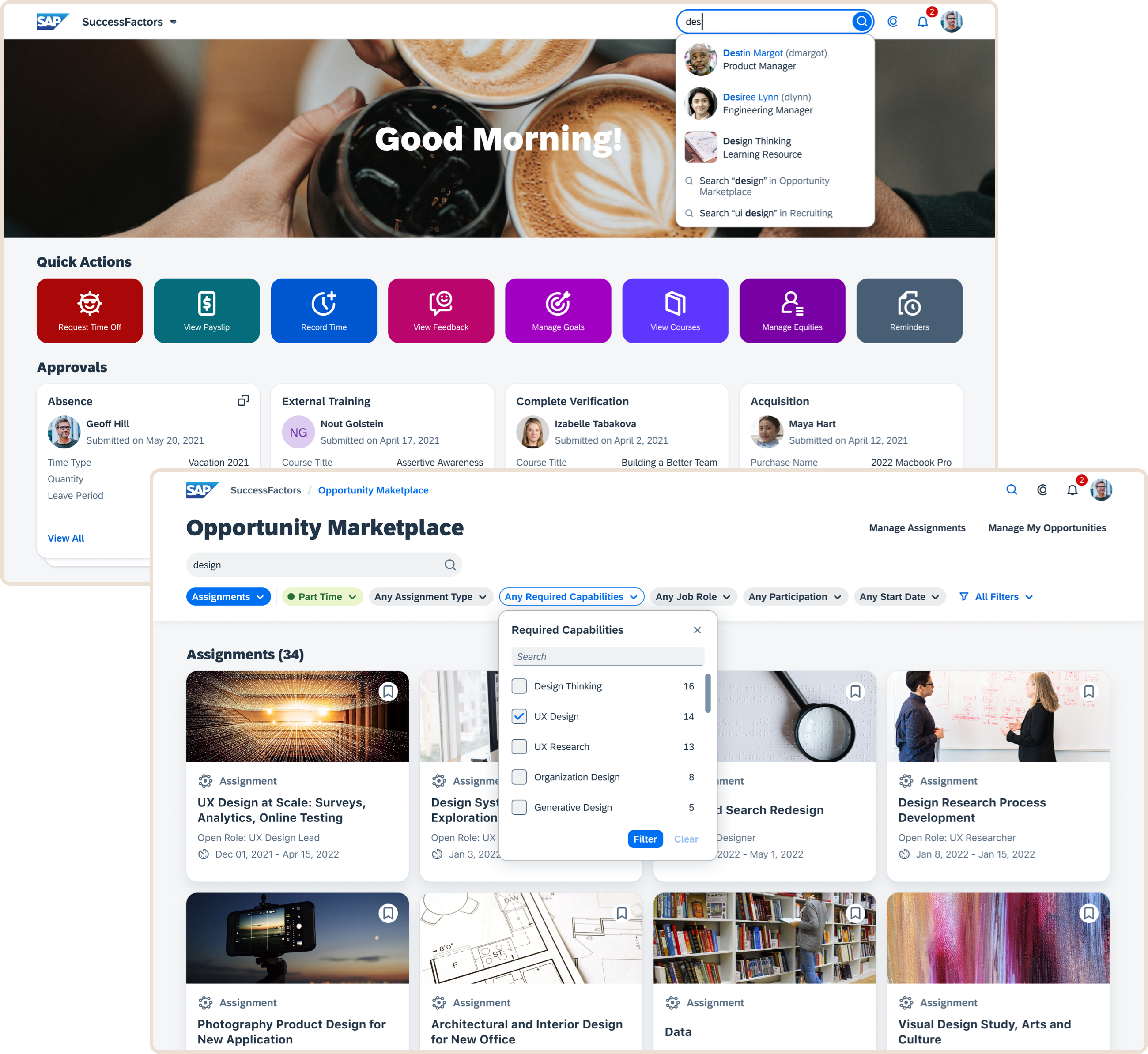 Fiori, the SAP design system, has been going through a full redesign wherein everything is modernized from the ground up. I have worked closely with the design systems team and personally helped to evolve Fiori to its next iteration. This has demanded high level pixel-perfect work on responsive web, iOS, and Android. 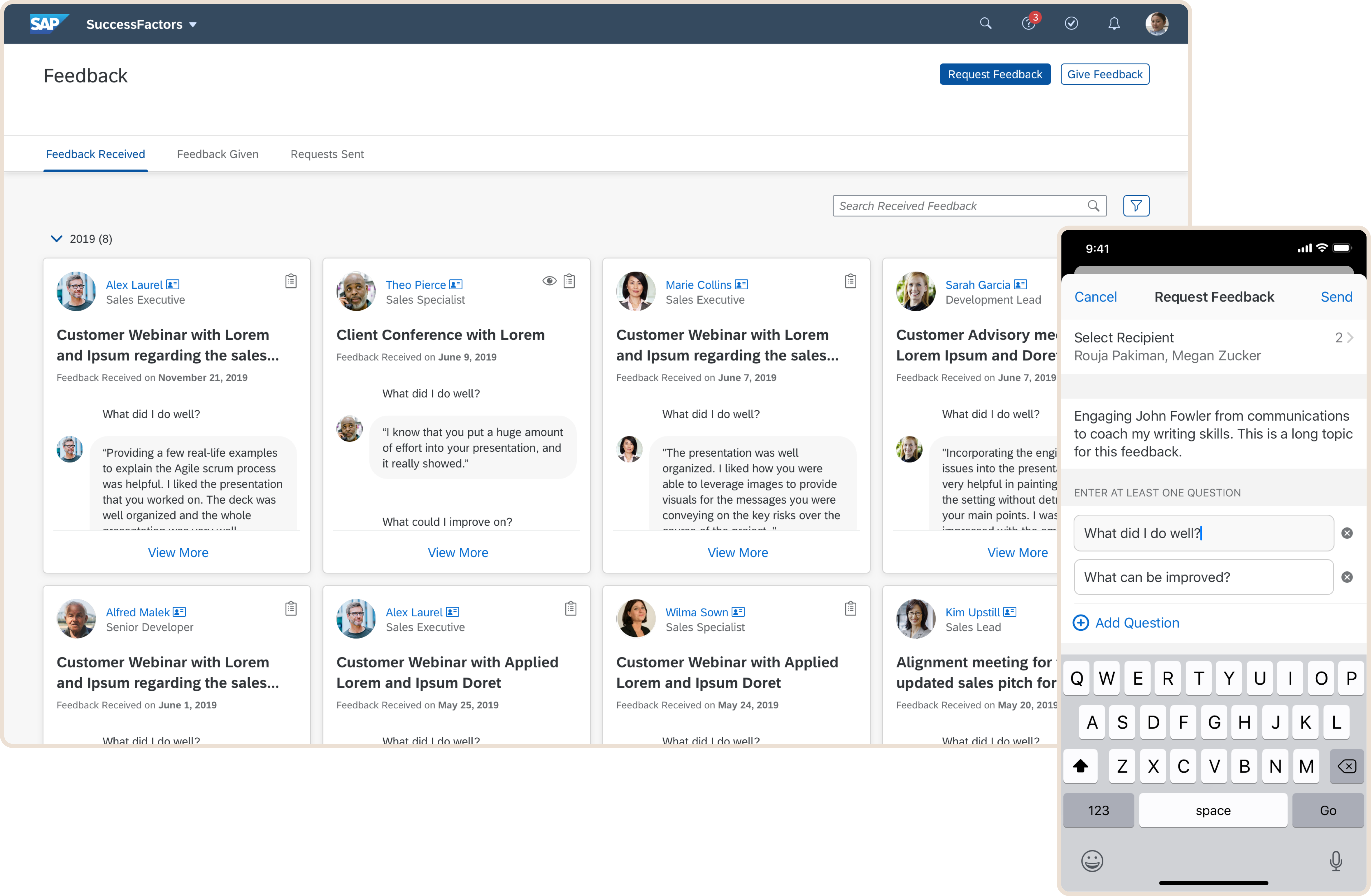 My current work is extremely customer and data focused. Projects often require understanding not only user needs, but the administrative vision of our customers and business cultures at a high level. I have worked directly with many of our customer leaders to provide unique experiences that are tailored to meet their needs. This has occasionally involved working outside our platform and integrating directly with other software, as with our Feedback integrations into Microsoft Outlook and Teams. 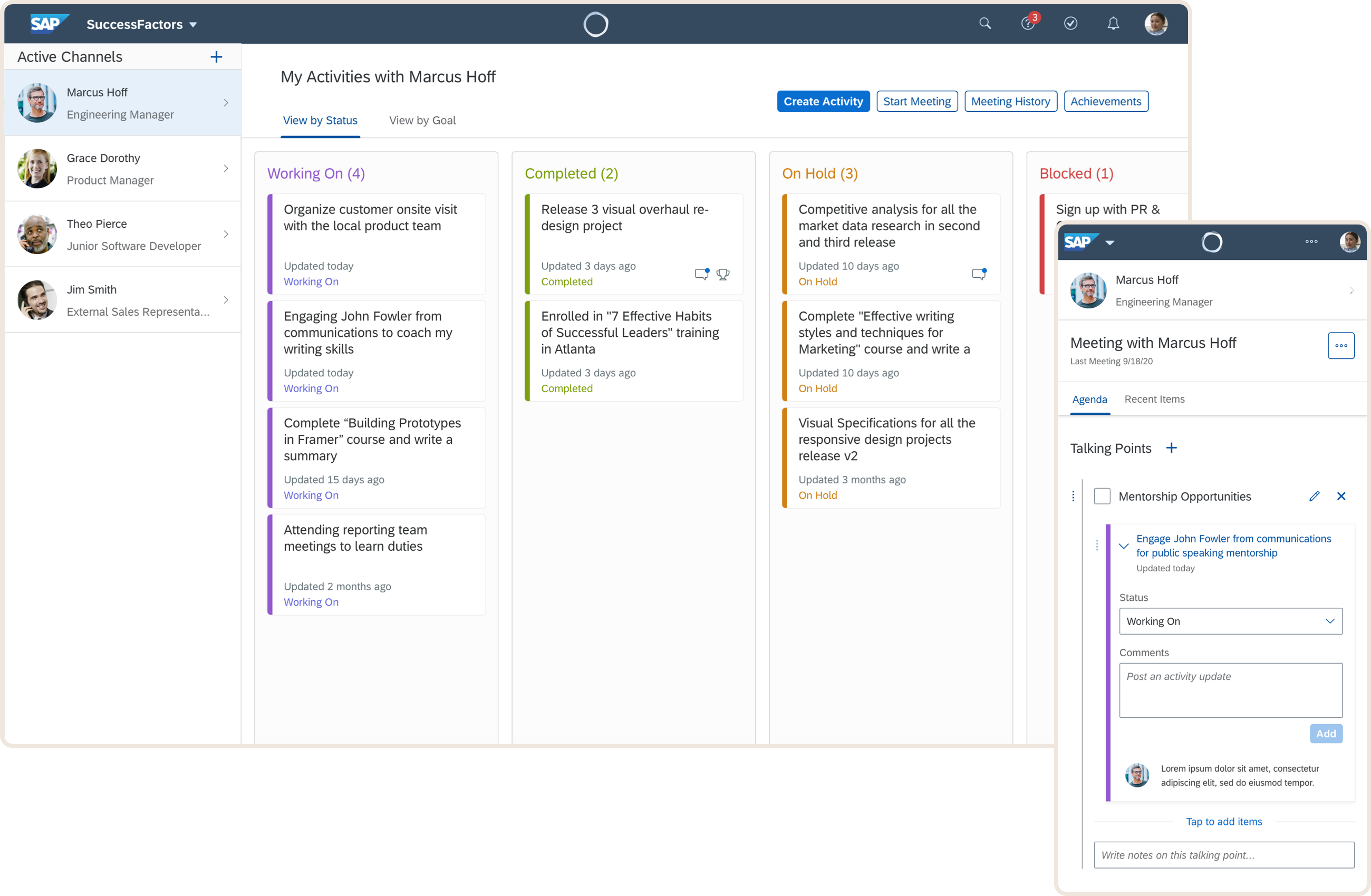 SuccessFactors is a serious force in its industry and only getting better from here. I continue to hone my craft every day alongside an extremely talented team, and I am proud to have worked on something that has touched (and hopefully improved) the lives of so many others.

Ridecell is a mobility software company that provides a platform for companies to launch and run their own vehicle-sharing or ride-sharing services. I worked on Ferrovial’s “Zity” in Madrid and Paris, BMW’s “ReachNow” in Seattle, AAA’s “Gig Car Share” in the Bay Area, and Google’s “GRide” and “Waymo” services in Mountain View and Phoenix. Each of these had a web-based system for dispatchers, a native mobile application for drivers or maintenance workers, and another native mobile application for riders. 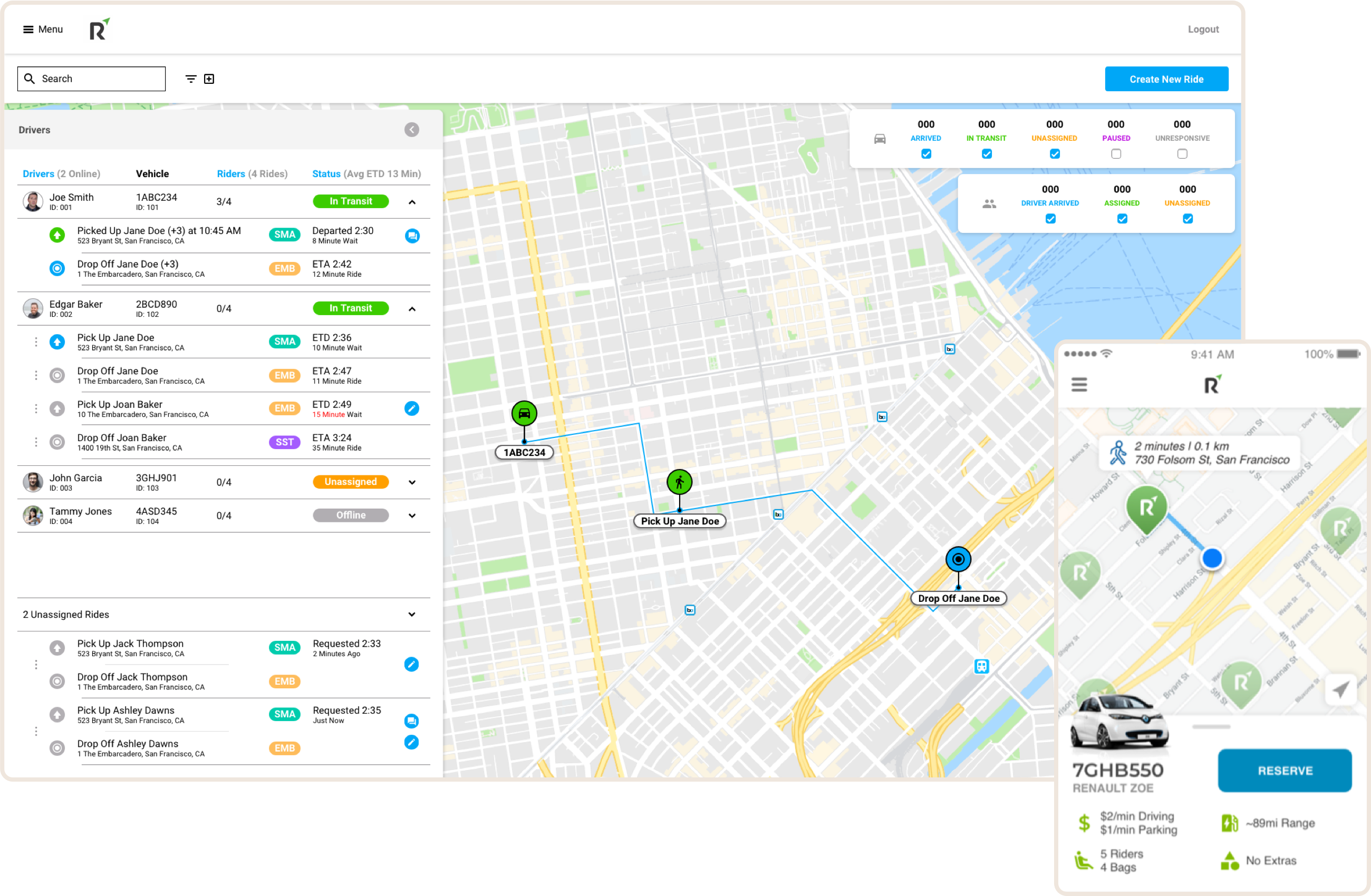 During my time at Ridecell, the company went through a huge phase of booming growth. We significantly grew our vehicle and customer count, the company nearly doubled in size, and the design team changed its structure entirely. Alongside my core skill set, Ridecell taught me about scaling and keeping structure in unclear situations.

Discidium, now defunct, was an academically focused Machine Learning as a Service company that worked to provide tools to quickly and easily model and publish research data without the need to write code. This was done through a web-based client using AWS resources. Not only was I the UX designer for the full experience, but as the first and only designer at the company I had the opportunity to develop the design process and system, owning effectively every role in the design space from research to release. 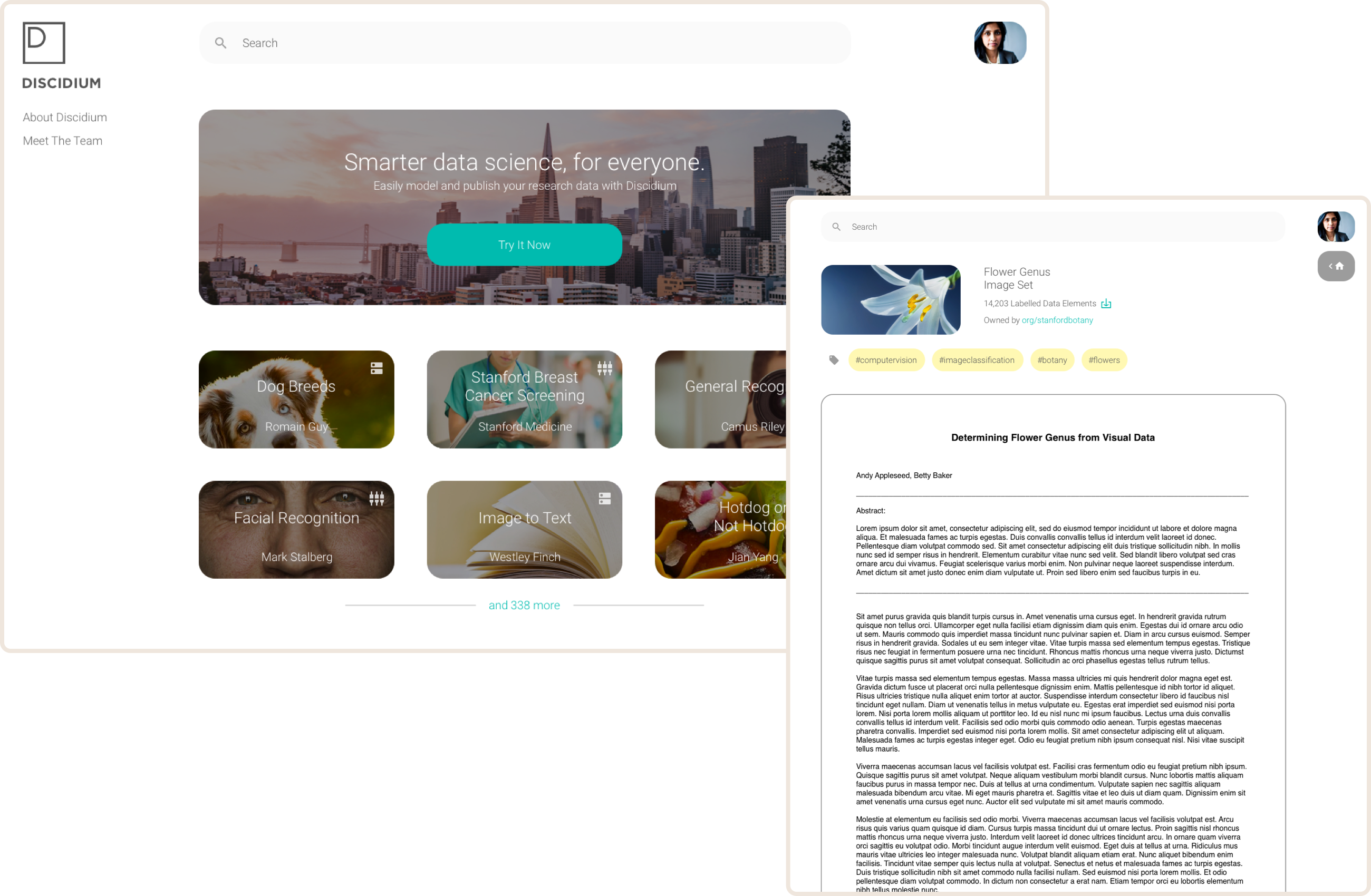 As a very small company, Discidium had a number of unique challenges. I am personally thankful for my first opportunity to build a product and a design system from scratch, as well as become much more familiar with design and technology as a business as we pursued investment. Though Discidium is now defunct, I still view it as an invaluable learning experience.

Ascendify is an enterprise class HR software company that, at the time of my hiring, was focused on creating applicant tracking and recruiting systems for major customers including GE, Cisco, and Panasonic. During my time there the company roughly doubled in size and grew its functionality to include employee assessments and internal growth opportunities. I had the chance to work on nearly every part of the application in both a research and design capacity. 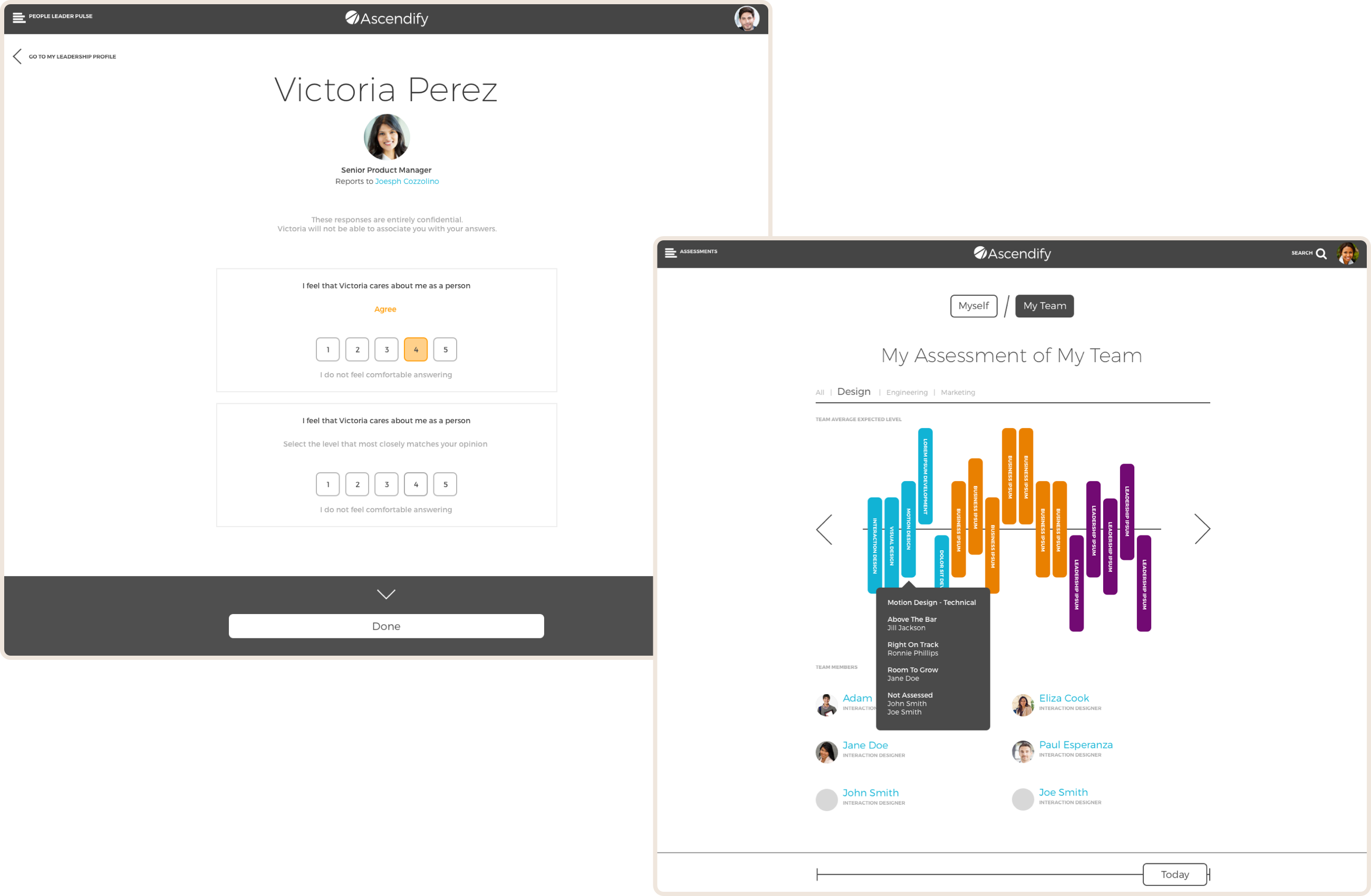 More so than any of the work I completed at Ascendify, what I got most out of my time there was a learning experience that will last the rest of my career. It was my first time doing design work in a professional setting, and as a member of such a small team I received direct mentorship and the chance to flesh out my skill set and take the first big step into being the designer I am today.

Bachelor of Science Student from September 2011 to June 2015

The Computer Science: Game Design BS at the University of California, Santa Cruz is a program where students are provided the resources to design and develop full release software and games in addition a traditional computer science curriculum. Over the course of achieving my degree I completed four games, one per year. The first was a puzzle platformer called “Utapei” made in GameMaker, the second was a JavaScript turn-based real-time hybrid strategy game called “Temps Perdu”, the third was a procedurally generated top-down shooter called “The Narrows” developed in Unity for the Microsoft Surface, and the final project was a first person VR puzzle game called “Jamais Vu” developed for PC in the Unreal engine with specific support for the Oculus Rift. 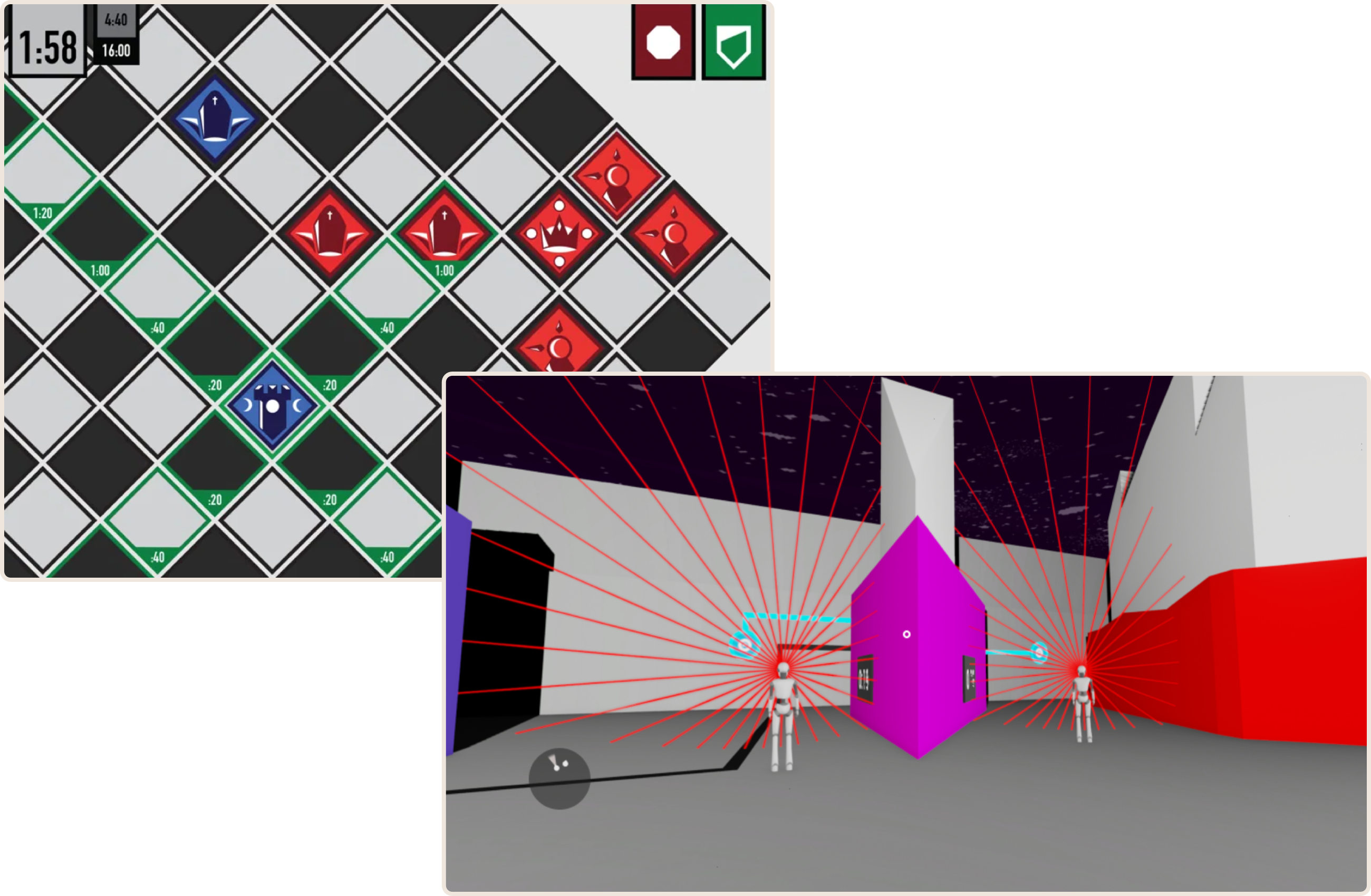 After graduating university, I've continued to design games as a personal hobby. Though most of these aren’t polished or relevant enough to appear in this portfolio, one good example is my iOS game Tempire, which was an interation on my old university project "Temps Perdu". Tempire was released with local play and online play via Game Center in 2016, and was updated with AI in 2020. It was designed by me and developed by my friend Matt Jee, with music from Jacob Rhein.